A medical report from the stone age?

During the last decades of this century several prehistoric human mummies with well-preserved tattoos have been found in Siberia, Peru, and Chile. Some of the tattoos were obviously decorative, but others were of less aesthetic value and of unknown use. In the well-preserved mummy of a Scythian horseman ( figure 1), there are ornamental and non-ornamental tattoos. The difference in the tattoos is so obvious that there is speculation about a possible therapeutic importance of the ones in the perivertebral and retromalleolar region.

In 1992, a mummy was discovered in the necropolis of Chiribaya Alta, southern Peru. The mummy had ornamental tattoos depicting stylised apes, birds, and reptiles on the forearms, hands, and lower legs (figure 2, top). There were additional tattoos on the neck and the upper part of the back. They are circular, of simple shape, and remain hidden by the neckhairs and the clothing (figure 2, bottom). The hidden position of these marks points to the possibility that they have therapeutic importance (SG, KS, unpublished observations). 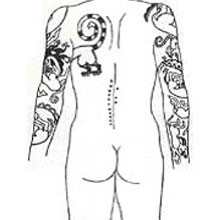 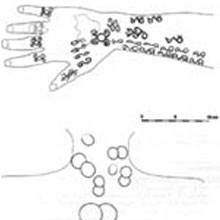 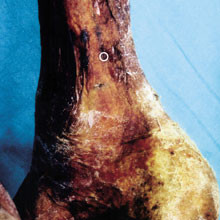 The Tyrolian Iceman, the oldest European mummified human body with tattoos, shows some 15 groups of tattoo-lines on the back and legs. They do not seem to have decorative importance because they have a simple linear geometric shape and are located on the less visible parts of the body. The question arises as to whether they also have medical significance.

One of us (FB) was looking through photographs in the book The Man in the Ice and noticed a striking proximity of some of the tattoo locations to the locations of classical acupuncture points. This initiated our investigation; Austria we hypothesised that there might have been a medical system similar to acupuncture (Chinese Zhenjiu: needling and buming) that was practised in Central Europe 5200 years ago.
In acupuncture, the location of points is defined by a relational measure (the cun, Chinese for inch) derived from the anatomy of the patient. The cun is defined by the width of the interphalangeal joint of the thumb but can also be determined by a certain fracfion of the length of the femur, the tibia, or the radius. Using these relations and published data of the Iceman, we calculated that cun was about 22 mm or about an inch. We then converted the morphometric measures of the tattoos to cun and overlayed the locations of the tattoos to topographical representations of the Chinese acupuncture points as referenced in acupuncture texts. To investigate the in-situ situation in the mummy, one of us (LD), an experienced acupuncturist, subsequently investigated the tattoos morphometrically during a visit to the Iceman in his special chamber at the Prehistoric Museum of Bozen, Bolzano, Italy.
Ötzi Forschung
The Lancet
Ötzi war akupunktiert
Ötzis Tätowierungen
5200 Jahre Akupunktur?
Top